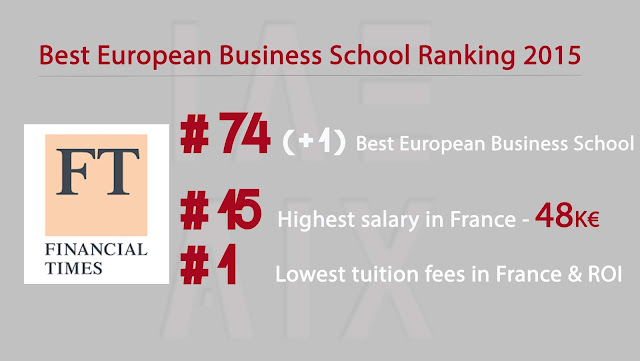 The Financial Times Best European Business School Ranking: Aix-Marseille Graduate School of Management – IAE moves up (+1) and confirms its leading position in the World!
IAE Aix-Marseille is proud to announce that in the prestigious Financial Times Ranking, published on December 7, 2015 it has now moved up to the 74th position in the top 110!
IAE Aix-Marseille is among the only 4 out of 22 French Business Schools  to move up in the ranking, while all the others are declining. Also, it is 15th in France in the terms of average salary of recent graduates.
It is also the only public institution in France to participate in the ranking and it has the lowest tuition fees in France.
France enjoys the highest number of Business Schools in the Ranking, dominating even in front of UK (19 schools).
IAE Aix-Marseille has been ranked consistently since 2008, confirming the leading position of the school in the world.
Enregistrer un commentaire
Lire la suite
Autres articles